On 7th May 2019, the Intergovernmental Science Policy Platform on Biodiversity and Ecosystem Services (IPBES) released the first global biodiversity assessment since 2005 (draft chapters and summary report). Comprising nearly 15,000 references, a team of 150 leading international experts of the natural and social sciences from 50 countries worked with IPBES for more than three years to inform better policies and actions. Release of the ‘Summary for policy makers’, launched at the United Nations Educational, Scientific and Cultural Organisation’s (UNESCO’s) world headquarters in Paris, lead to a global outcry of dismay from the media and conservationists to strive for a transformative change of our society. The summary discusses the main causes of biodiversity loss and outlines the future for their conservation over the next three decades.

Recognition of a new subspecies follows certain protocols; once a population has been isolated geographically and reproductively, to the extent that the subspecies has developed morphological or genetic distinctions from the original species, but still has the potential to effectively cross-reproduce (Mayr, 1970), it can be considered a subspecies. In the case of the Hector’s dolphin, four sub-populations have been identified genetically (Pichler, 2002), with no gene flow connection between the three South Island populations to the smallest population solely residing off the North Island, presumably isolated for 15–16,000 years, named Māui’s dolphin (Baker et al., 2002; Hamner et al., 2012). Although the two subspecies may look identical, sharing the same features of a rounded black dorsal fin and a lightly grey coloured body, black and white patterning around their heads and along their ventral body side, they are genetically and morphologically different. Māui’s dolphins have larger skulls and longer, wider rostrums (‘snout’ part of the skull) and can be differentiated through mitochondrial DNA and microsatellite genotype analysis (Hamner et al., 2012).

The world’s smallest known dolphin, Māui’s dolphin is a subspecies to one of four species in the genus Cephalorhynchus, all of which are small dolphin’s, endemic to coastal waters of the Southern Hemisphere (Dawson, 2018). The name Māui originates from the indigenous NZ language ‘Maori’, and its name for the North Island, namely ‘Te Ika a Māui’, translating to ‘the fish of Māui’. According to Māori mythology, demigod Māui was fishing with his magic fishhook off the South Island, when he caught a great fish that later became the North Island, where Māui’s dolphins have been found.

Primarily residing in waters less than 150 m depth, their diet consists of small schooling fish and squid, reflecting prey availability (reviewed in Miller et al., 2012). While many other dolphins use whistles to communicate via echolocation, Cephalorhynchus dolphins appear to rely solely on high frequency clicks (Dawson, 2018). Research suggests that this technique (also applicable to porpoises, e.g. harbour porpoises, Phocoena phocoena) might have evolved as an anti-predator mechanism against killer whale (Orcinus orca) predation, due to decreased chances of detachability (Morisaka and Connor, 2007). To enable the public to better understand their communication, the University of Otago, NZ, has transformed their sound clicks (with 125Hz) to a lower frequency, allowing humans to hear their voices.

There are a wide variety of potential threats to this species; however, the primary reason for their decline is believed to stem from fishing activities and increasing marine traffic as outlined in the ‘Hector’s and Māui’s dolphin Threat Management Plan’ (DoC, 2007).

To try and reverse this population decline, the NZ government established a marine mammal sanctuary along the west coast off the North Island (DoC, 2013), and implemented a range of restrictions to commercial net fishing activities (Stewart and Callagher, 2013), with increased enforcements after the death of a Māui dolphin in 2012 (Hamner et al., 2014). All these restrictions have not yet been sufficient to enhance the population recovery (de Jager et al., 2019). While anthropogenic factors still pose the biggest overall threat to marine mammals, a recent study identified an infectious disease, Toxoplasmosis, to be the cause of 25% of mortality of Hector’s dolphins (Roe et al., 2013). More research needs to be conducted in order to fully understand the role of this disease in the marine environment and its infectious potential and linkage between humans and marine mammals (Van Bressem et al., 2009).

As a result to the decline of the Māui’s dolphin, the species has been classified as ‘critically endangered’ by the International Union for Conservation of Nature (IUCN, 2012) and as ‘Nationally critical’ by the Department of Conservation (DoC) in the New Zealand Threat Classification System (Baker et al., 2010; Baker et al., 2016b). Recent microsatellite genotype identification models, particularly useful for the low number of natural body markings, revealed that the population has likely declined during the study periods of 2001–2016, with an estimated remaining population size of around 55–63 individuals (Baker et al., 2013; Baker et al., 2016a). Unfortunately, in addition to their restricted geographic range and small population size, Hector’s dolphins in general have a slow reproduction rate and are relatively short-lived, with females reaching reproductive age nearly half way (7-9 years) through their maximum age up of around 20 years (Slooten, 1991), additionally endangering their survival (Davidson et al., 2012).

Overall, the species with the characteristically round shaped dorsal fin are an important part of NZ’s natural heritage, similar to the kiwi. Although Māui’s dolphins are extremely threatened, there is still hope for subspecies if further mortalities are prevented. To engage the public on their protection, the NZ government, DoC, has launched a community sighting program (‘Rounded fin? Send it in!’) and is working with a range of stakeholders and local scientists to find additional ways to protect the species.

Other posts you may enjoy... 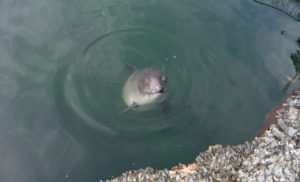 DECOMMISSIONING: WHY A NET ENVIRONMENTAL BENEFIT ANALYSIS BASED COMPARATIVE ASSESSMENT (NEBA-CA) APPROACH IS THE FUTURE